Thank you, London, for hosting the 30th Olympiad. The Summer Games were thoroughly enjoyed stateside. 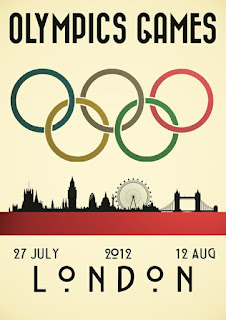 In order to get the international event off to a good start, we decided to host a Summer Olympics Soiree. (Evite had an adorable Olympic-themed invitation with the iconic Underground symbol as one of the Olympic Rings, but I was unable to copy it from their site.) Just a barbecue with some pick-up sports equipment on hand for the kids: hula hoops (rhythmic gymnastics), jump ropes (high jump?) and badminton raquets and birdies. It's too bad we didn't have our own outdoor aquatic center because a dip in the pool would have certainly cooled off the 90 degree evening. Maybe we can have one installed before the 2016 Games.

Of course we had to make the space Olympics-worthy, so the girls helped paint red, white and blue cardboard letters to support the U. S. team. 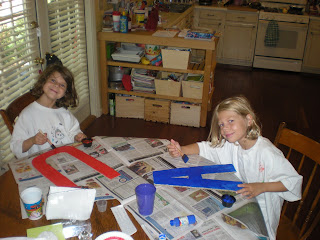 The signage was hung with R, W and Blue ribbon, flanked by R, W and Blue string lights (courtesy of Target's Fourth of July clearance: $1.50 per 10-foot set). 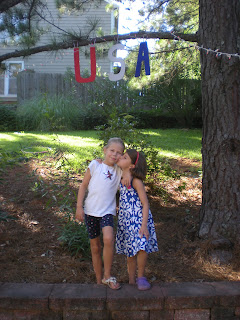 For a little fun, the adults were subject to a brief trivia quiz, with star-splangled mints given to the players who came up with the fastest answers. Kids were lined up to do a (mini) discus throw with R, W and Blue glowstick necklaces for a prize. 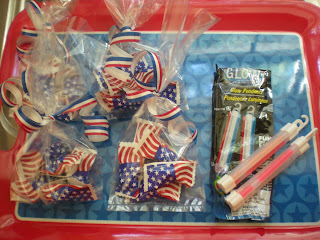 Those were pretty cool to photgraph while they were twirling them around and making glowstick art in motion. 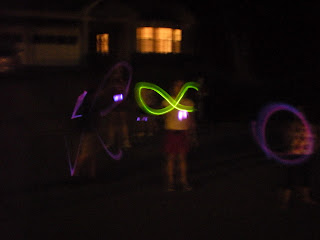 And as a final note to the evening, we gave the kids a lightweight torch (ie, sparklers) to carry. Who knows? One day one of them could be an Olympic champion! 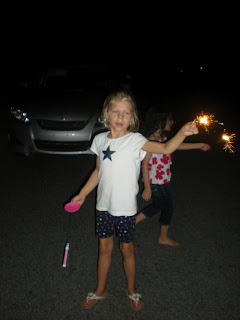 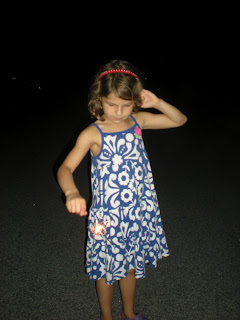 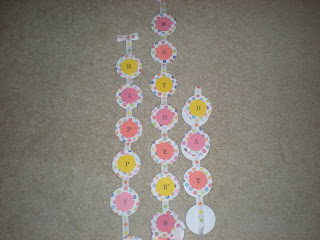 If you know me at all, you know that my favorite crafts take just a few "ingredients". This one calls for a couple sheets of accent scrapbook paper, 3 sheets of colored cardstock (or less), a coordinated ribbon (I prefer grosgrain), a 3 inch circle punch, 2 inch scalloped circle punch, double sided tape, a stapler and a computer printer.

My accent paper is Sandylion/Disney 'Mini Flowers' design (RMDWSCB83, the same I used for my Paper Pyramid favors). For the cardstock, I chose bright pink, peach and yellow. Then I printed the letters of "Happy Mother's Day" on all three sheets, using capital letters in the Diamond font at font size 54. Don't forget to add an apostrophe after the letter 'R'!

The 3 inch accent circles get stapled to the ribbon, then the cardstock circles attach to the 3 inch circles with double sided tape, covering the staple.

The ribbon loop at the top of the hanging ribbon is not a knot (hee hee). I cut a separate piece of ribbon, about 7 or 8 inches, and made a figure eight with it (stapling its center), then tucked the hanging ribbon over that staple.

Hang one in the doorway of a mom you love: 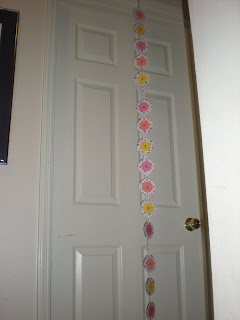 I folded my banner and tucked it inside a cardstock favor box from Dollar Tree (8/$1) and put on a few foam flower stickers to fancify it. 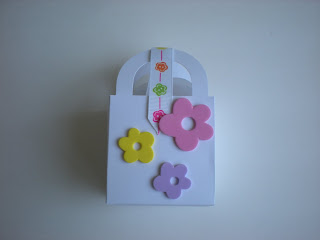 I leave you with my favorite quotation on motherhood, by Mildred B. Vermont:
Being a full-time mother is one of the highest salaried jobs, since the payment is pure love.

Happy Mother's Day to all you great moms out there!
Posted by M for Short at 11:22 AM No comments:

This weekend, with both days with heavenly temperatures in the high 70s/low 80s, we took the girls to our first Renaissance Festival. There was the requisite headlining act of jousting between two noble knights, 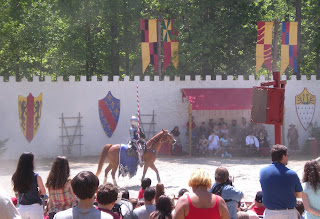 an array of sideshow street performers throughout the day - aerialists, jugglers, contortionists, 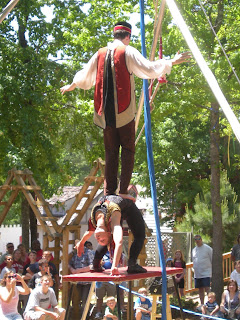 a petting zoo and an exhibit of rescued birds called 'Parrots of the Carribean'.

The most thrilling part of the event is that we met ROYALTY! The rest of the world can "ooh" and "aah" over William and Kate in London, but my two daughters were rubbing elbows with King Henry VIII and Anne Boleyn right here in the USofA! 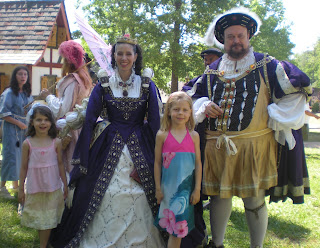 I was not expecting them to be so cordial with us commoners. What was even more adorable was they had a little ceremony to induct all the fair maidens to become 'Princesses of the Realm'.

First, they had to learn how to properly curtsey to the queen.

Then the queen herself taught them the secret (shhh!don't tell!) poem for them to address their subjects:
"Elbow, elbow. Wrist, wrist... 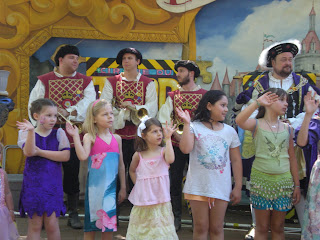 Touch your crown, and blow a kiss." 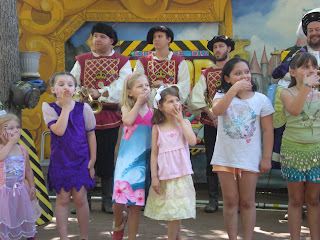 The little lasses were so intent on the queen's instructions. They all wanted to get it right. (All except for one hungry maiden, who was NOT abandoning her roasted corn on the cob, even when the queen was handing out their princess proclamation scrolls.) 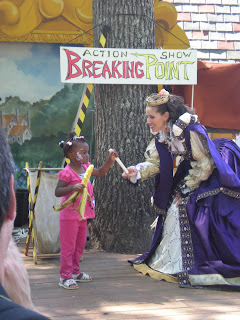 I hadn't heard the royal poem before. Maybe that's why my legion of two are so insolent! At least they still blew their 'Queen Mum' a kiss. 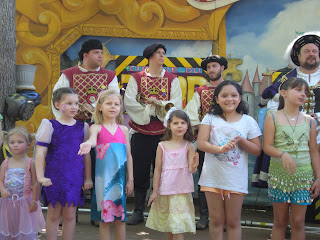 We are inundated with eggs! 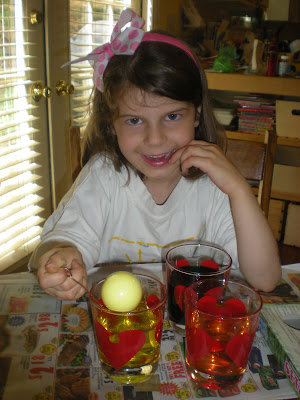 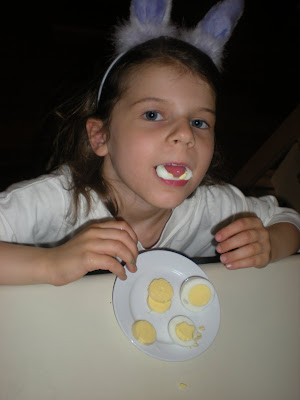 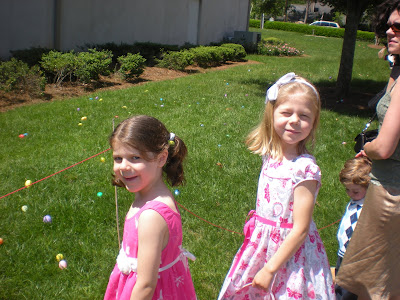 A beautiful weekend with my beautiful girls. I hope you all have had a wonderful Easter. 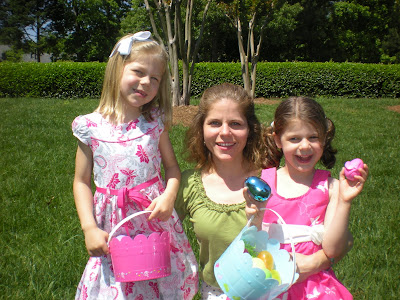 Lots of apothecary-style candy dishes were prevalent leading up to Halloween last year, most notable the simple-as-can-be tutorial on Dollar Store Crafts. I'm not exactly what you would call "speedy", but I consider getting one assembled before a year has passed pretty good for me. Easter candy tastes just as good! Supplies: Covered Candy Dish, Candlestick and powerful glue.

I know they're not fancy but for just about $2 a piece, they are perfect. So, how many days before they're empty?!
Posted by M for Short at 10:18 PM No comments:

Email ThisBlogThis!Share to TwitterShare to FacebookShare to Pinterest
Labels: Do it for a Dollar, Today's Inspiration

Plastic eggs abound this time of year. We've got several dozen around the house already, and we haven't even attended an egg hunt yet. So, what to do with the abundance of eggs now that all the treats and trinkets have been consumed/stashed away? Try what my daughter's preschool teachers did: There are single syllable rhyming words written on each egg that can be changed at the turn of the shell (jet/let/pet/get; top/hop/pop/stop; etc.). What was also clever was that since they didn't want one child picking up a half dozen "-at" eggs, they used markers to draw color coded dots at the bottom of each egg cup to be sure that each child received all the variations.
One of my most favorite bloggers, Lindsey at Filth Wizardry, has created her own version called a 'Spinny Speller' on which uses small-sized duplo blocks for each letter. Then for early readers, she uses stickers with sight words on the wider duplo blocks to construct sentences.
These eggs are just a simpler, less expensive way to accomplish the same result. A bag of eggs and a Sharpie. Doesn't get much easier than that.
So by the way, does anybody out there remember the jingle "The Incredible, Edible Egg"? Looking forward to eating some of the chocolate variety this weekend.
Posted by M for Short at 9:20 PM No comments:

Life is good when you get to gather with friends. Well, this trip was really about gathering with the hubby's friends. We were celebrating a milestone for him, after all. And what better place to celebrate than in NYC. 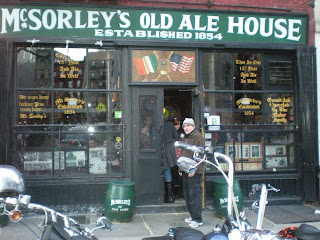 I have heard for YEARS about McSorley's. The fact their window advertises "We've been here since before you were born"; the sawdust covering the floor; the floor to ceiling eclectic array of memorabilia (including wishbones dating back to WWI); the crackers, cheese and pot of mustard tray; and of course, the half pints of beer they serve - light beer or dark are the only two beverage choices available - that are impressively served twenty at a time. 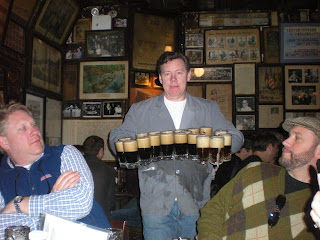 So, this "saloon" has been in existence for 157 years. And, oddly, even though I attended high school just one block away from McSorley's, I had never partaken of the darks and lights until 2011. However, I have a deep, meaningful relationship with McSorley's since 2003, when I was pregnant with my first daughter, and together, we read this Joseph Mitchell book: 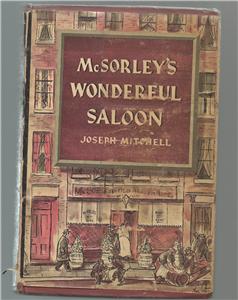 ﻿In it, we found a perfectly fitting name for our daughter. Just like her turn-of-the-(20th)century predecessor, our turn-of-the(21st)century girl has a heart of gold, and hopefully a strong connection to the city her parents love. Cheers to my hubby's 40 years. I love you, honey! 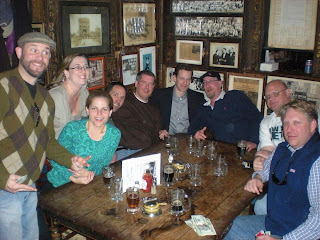 Don't you think every kid's lunch box deserves a little 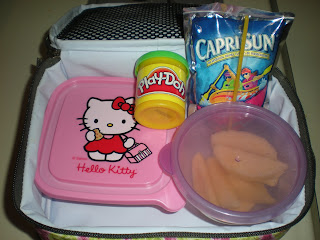 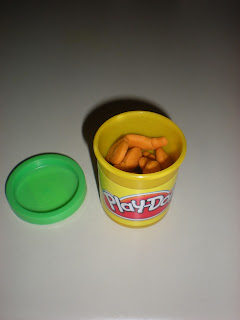 Thought it was worth a little laugh. Hope you were able to pull off a few pranks before day's end, too.
Posted by M for Short at 9:21 PM No comments:

M for Short
Atlanta, United States
Thirty-something mom originally from NYC, now living in metro Atlanta. You can take a girl out of the city... Feel free to contact me about any ideas you have to share, or if you were inspired by anything you saw here. MforShort@gmail.com

I've been spotted on